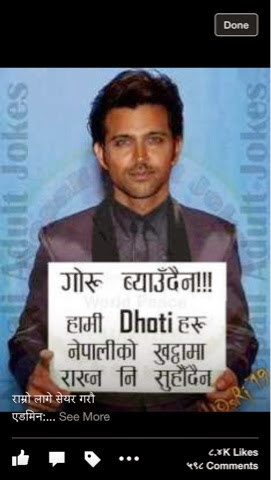 Last week, I saw a photo(above is the snapshot of the pic) on Facebook. Famous Bollywood artist Hrithik has carried a display card. It says - Ox does not procreate, we dhotis (bad name given to Indian by Nepali) can't be compared with Nepali in any terms. This is one of the pathetic, ridiculous and insane activities. However, the picture has got more than eight thousands likes. I felt so embarrassing to see a big number of Nepalese youths indulging in such hate speeches. Whatever our people especially young people may think about India and Indian people. But the real scenario of our relation to India is completely different than our hatred.
Wherever I have been as a traveller, most of the strangers ask me if I am from India, and interestingly I have felt offended whenever I am called an Indian.
Despite of the fact that we share same culture and a bit like same tradition, I always felt embarrassed of being said an Indian. I am unknown if it justifies that I am a true patriotic but I am sure, it does prove – I am a wretched young man who does not know the historic trace back of his own culture and tradition. And, yes, I am not feeling embarrassed to accept the fact that I am an impractical man. I merely know I am from a land where the Lord Buddha was said to be born, and the Mt. Everest lies. However, I always fail to accept that the outer look of a person does not state his/her nationality, and that's why most of the strangers disappoint me by presuming – "Are you from India?"
India is 21 times bigger than our country, but whenever I get to see the crapped comparison by my people about Nepal and India, Nepalese and Indian, I cannot stop laughing at their miscalculation. I agree, the total land mass of a territory may not indicate their superiority but how can we ignore India's economic growth and its super-huge potential market?
Our mothers and sisters can't pass their time without watching Hindi serial, and we cannot simply quit watching Bollywood movies and reality shows. Many of us would like to make six-pack as Salman has, and the hair style Sahid has. Even our girl friends would love to imitate the nail art as of Bollywood actresses. Nobody can omit the truth that our every daily lives are under their influences. Then, what is the point of hating them and their cultures? Let's not forget, we can neither justify our patriotism by bullying others nor establish the unity amongst us.
Well, we have been reading and watching the reports that Indian border forces intrude our land. Some reports indicate even worst situation that the border forces have illegally entranced into our territory, and tortured our people. It's so pathetic. Shame on them for what they've done. In such particular cases, Instead of making hate speeches, we should build up pressure on our government for taking adequate diplomatic action.
I, a Nepali youth like you, humbly request you please stop bullying people for what their government is responsible.
Let's blossom the flowers of love, instead of hatred.
"When things go badly, individuals look for scapegoats. I just do not believe that barbed-wire fences or guns on our border will solve any of our problems." 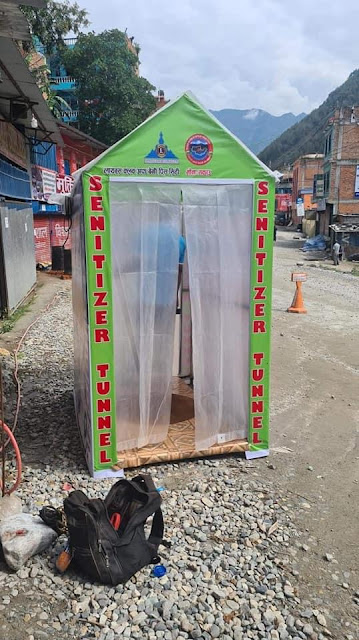